Here we are on the first of December, and only one month remaining of 2019.

Back in September, I wrote that I was going to focus on short fiction for the rest of the year, and to a point, I did that.

I outlined some sequels to my Christmas story, Operation: Sugarplum, and my intention was to work on those for NaNoWriMo. You can see some of my ROW80 updates as I planned for those. But I don’t know… maybe I hadn’t planned well enough. Maybe Sugarplum isn’t meant to be part of a series. Maybe they sequels need more planning or maybe I was trying to write too much each day.

Whatever it was, I was not happy with anything I was writing. I know that’s typical for NaNo, but having not done NaNo for a few years, this really reminded me why I’d started avoiding it. I already have a writing habit, a discipline, and I don’t really need to force myself to write huge amounts of words to get there. So NaNo got abandoned. Ah well. 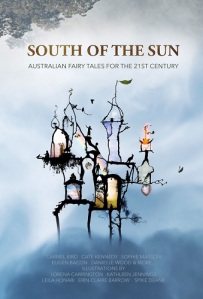 Back to short fiction. Halfway through November, I heard about an anthology being put together by the Australian Society of Fairytales. It’s called South of the Sun and the requirement for this anthology was to contribute something that could be considered an “Australian fairy tale”. I started playing around with some ideas about the bush and drew on my memories of training in our National Parks when I was preparing to trek in Nepal last year.

Next thing I knew, I had a 1500 wod short story about a lost and dyhdrated hiker who is helped back home by a kangaroo that may or may not actually exist. I worked it up a bit, and then sent it off to some friends, who gave some really helpful feedback. I spent this weekend working on a subsequent version that incorporated their feedback and is now 500 words longer (oops!) but still within the limits for the anthology (yay!).

I mentioned back in September that I wanted to come up with something for the Zodiac series of anthologies being produced by Aussie Speculative Fiction. I’m a Leo, so that was the sign I most wanted to write about. I always joke the reason I became a performer is because I’m a Leo and want to be in the spotlight. While I have only made a few notes on my idea for this submission so far, there will definitely be an element of over-dramatic actors who hog the limelight. And you know that it’s bad luck to perform in a theatre with no ghost, right? The Leo volume is not yet open to submissions, so I’ve got a little while to work on it.

And the third thing currently on my list is Once Upon A Hallowed Eve: An Anthology of Romantic Ghost Stories, because I already had an idea that will work quite well here. This is being produced by Once Upon Anthologies, and I love their whole idea of collections of romantic stories set around particular holiday or place.

I said in September I intended to return to my novels in January, but that was when I was forcing myself to take a break and just seeing where short fiction would take me. Now that I have some solid places to submit to and a couple of places with lists of others, I’m thinking I’m going to stay in this region a while longer. My novels aren’t going to run away.

One thing I’ve noticed with what I’ve written over the last six months is that I actually think I benefit from giving my stories an Australian background. I’ve always considered myself a fantasy writer but I do struggle with things like world-building. And of course, fantasy can just as easily be set in Australa as anywhere else. The Australian connection doesn’t have to be strong, but I think it helps me. So that’s something I’m definitely going to bear in mind (might make the novels troublesome).

How’s your writing going? Are you starting to think about writing related 2020 goals?