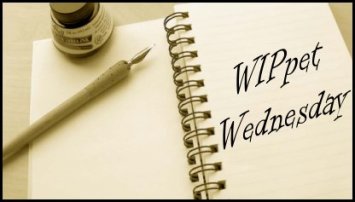 Well, hello. It feels like forever since I last particpated in WIPpet Wednesday. I’m sorry the linky was delayed last week and again today. I don’t know why, but my phone isn’t giving me reminders like it should, and I’ve been so busy and scattered and tired that I forget when left to my own devices.  I checked and nothing has changed in the set-up for said reminders, so I don’t know what’s going on.

Despite not blogging much, I have been writing. I said in my last post six weeks ago that I was aiming to hit at least 10k for the third month in a row. I managed it in September and have actually already hit that total again for October, bringing the total word count of Unchanging Tunes to over 50k. I’m thinking it might be done at around 80k but I’m not too sure. I need to try to make time to sit and write a detailed plan and work out what I’ve already written and what I still need to write. Maybe I need to skip actual writing for a day and just do that instead. 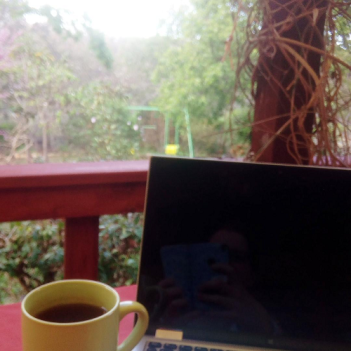 I was disappointed in myself for breaking my daily writing streak, but I am trying to get better at not worrying too much about streaks. So many apps I use have streak measurements that can’t be turned off, and it actually bothers me. I’m trying to focus on the milestones instead. I spent the weekend just gone with some writing and blogging friends on a reading and writing retreat and it was wonderful. It was only ten minutes from my home but felt like we were in the middle of nowhere. The photo on the left is the view from the back verandah, where we spent quite a lot of our time. When I wasn’t writing, I sat in an old wooden rocking chair to read my book.

i’ve written so much since my last WIPpet that I wasn’t entirely sure where to start when choosing what to share with you this week. In the end I’m going with a section that takes place slightly before last week’s. There has been an accident during a performance of the circus attended by the Crown Prince, and Ria’s friend Lucy has been grievously injured. Ria had foreseen the accident and tried to persude Jeremiah, the owner, to leave out the trapeze act, but since it’s a draw-card, he insisted it go on.

We were interrupted by the sound of someone clearing their throat above us. We both looked up, and subconsciously moved a littler closer together and to Lucy when we saw the Crown Prince standing over us.

“I’ve sent my man to fetch a doctor” he said. “What happened here?”

“The rope was tampered with. They did all the usual safety checks and didn’t spot anything, but someone must have got in at some point afterwards and -” I was cut off by the lump that formed in my throat.

“I’m sorry,” I choked out. I covered my mouth with my hand. Tears were in my eyes and I could feel a full blown sob welling up inside me, but I couldn’t cry in front of Prince Julien.

“Your Highness! I’m so sorry you had to witness this terrible thing.”

The three of us looked over to where Jeremiah Casyl was walking quickly towards us. He stopped a metre or two away, and glanced down at Lucy just long enough to scowl at her before he schooled his expression into one of contrition to look at the Prince.

Well, at least he gave me somewhere to direct my anger. I launched myself at him, shrieking. My fists pounded on his chest.

“You knew!” I screamed. “I told you this would happen. You knew it would happen and made her go on anyway! You knew!”

It’s interesting because this longer work is based on a short story I wrote back in January. There’s a prince in that one, too, and he’s an awful, awful person (Ria actually worked for him in that version). But the second I started writing Prince Julien, I knew he was one of the good guys. There’s a line later on where Ria says that if he wasn’t more than twice her age, married and a member of Royalty, she might have kissed him. 🤣

All right, that’s it from me for now. I’ll catch you on your own WIPpet posts soon.