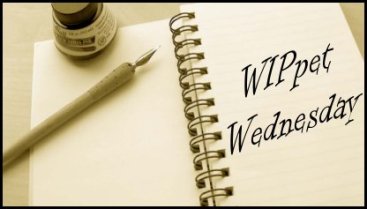 I am finally on the mend after having a bug that left me with a very snotty nose and a heavy head for about a week and a half. I thought it was just hay fever, since it’s that time of year, but then I got extra symptoms which indicated it was not that. That does mean that I am finally writing again. The muse just wasn’t there before and trying to write in spite of that just made me more frustrated. I’ve started writing out of sequence again; I often end up doing this because I usually have scenes from later in the story that are very clear in my head and I move onto those when I reach a point where I’m not sure what should happen immediately.

Now it’s time for a WIPpet. In this scene, Clara has been brought in by the Magic Guard for apparent use of magic, which is totally what she did, but she’s in denial about it. Rikard Voidsun has just given her a long explanation about the magical royal family of a neighbouring country, and how the true heir to the throne is currently missing and the country is under military rule. Clara is wondering what on earth this all has to do with her. This is 10 lines in my notebook, which is the sum of the digits in 2017. (The notebook is quite narrow and my handwriting is kind of big)

“The missing queen’s name is Clara, just like yours. And this -” he placed a sheet of paper featuring a pencil sketch on the desk between them – “is what we’re told she looks like.”

Clara looked down at the drawing and felt her stomach drop. It was a picture of her.

And that’s where the chapter ends.

Also in the writing I was doing today, there’s a secret science facility and I am having some ideas about the people in this country having isolated a magic “gene” and how they use that knowledge with the magic ban. There’s this rumour that when the Magic Guard tests you for magic ability, their processes are akin to torture but it’s actually just a blood test.

I have a question for you all. Those of you who have been following my WIPpets for a long time (and back on the old blog before I created this one) may remember that Memories and Magic came out of a novella-length retelling of The Nutcracker, which then got ideas above its station and wanted to be a full-length novel that bore little resemblance to that original story. What started that expansion was my desire for Clara to not be a passive observer during the climax, because I like stories where the girls help the boys save the day… but at the same time, I was nearly through a second draft when I started Memories and Magic instead, and now I’m wondering if I could treat them as two separate things, and actually do something with Operation: Sugarplum (as it is/was known). Particularly considering Memories and Magic is going to take a while and it would maybe be nice to have people reading something else I’d written as well? I haven’t quite decided whether I’d make it available for free or set it up as a 99c ebook or what, but what do you think of it as a vague idea?

In other writing news, I’m spending this Saturday and Sunday at a spec-fic conference and I’m very psyched for it. It is fairy-tale themed so there’s quite a lot of talk about fairytales’ dark origins and things like LGBTI fairytale re-tellings and themes, then there are also some sessions on publishing and some on creating good villains and putting science into fantasy and things like that. So I will report back on that next week!