Hello everyone and welcome to the inaugural post on Letting The Voices Out, my new writing blog. I decided after some consideration that I wanted an online space for my writing separate to that of A Keyboard and an Open Mind. I love reviewing books, but over there, my own writing was getting rather drowned out by talk of other people’s.

I‘ve decided to start things off with a bang, using one writing challenge to help me complete another one. Hopefully. As those of you who  have followed me over from A Keyboard and an Open Mind would know, the first draft of my YA fantasy, Memories and Magic is currently in a drawer, waiting for revisions after this semester ends. In the meantime, I am going to brainstorm the ideas I have for a sequel. I’m using both the Story a Day in May challenge, along with Faith Rivens‘ Fictional MAYhem prompts to come up with scenes that may end up in the story in one way or another, or may just help me work out where the story might go.

In the interests of still writing a story while following the prompts, I’m going to introduce the two characters I’ll be mostly focusing on through a story. So without further ado, say hello to Queen Clara Winterburn and Max Drosselmeier (whose surname is likely to change in revisions, but this will do for now).

The Queen stepped into the room, followed by two men in purple robes. One of them Rikard recognised as Reiner, the Mage who had greeted him on his arrival. The other was a younger man.

Rikard’s attention quickly went to the Queen. It was a shock just how young she was. Of course, he had been told she was only eighteen but to see her in the flesh was a different story. The stories all said that the monarchs of Thelidon were powerful, but had she really reclaimed her Kingdom from a a General and his entire army single-handedly?

He stood up as she approached the seat at the head of the table. Reiner took a step forward.

“Your Majesty, this is his Excellency, Rikard Voidsun, the Racharan Ambassador to Meshus. As it has been that long since our nations have had any, er, official contact, he was the closet representative the Racharan government could send.

“Mr Voidsun, this is her Majesty, Queen Clara Winterburn of Thelidon.”

The Queen immediately held out her hand to him. “Pleased to meet you, your Excellency.” Rikard took the proffered hand shook it. “I’m sorry we couldn’t meet under more pleasant circumstances.”

Rikard frowned. She realised she was the one who had caused the trouble in the first place, didn’t she?

Reiner sense the awkwardness and coughed. He motioned to the other Mage, who was standing at the Queen’s left. “This is Max Drosselmeier. He was, uh… also involved.”

Rikard nodded. He had been told that there had been three of them in Racharan, but two would do for now. They all sat down, the  Queen at the head of the table, the Mages to each side of her, and Rikard in the second seat down next to Reiner.

The Queen spoke first. “Mr Voidsun, I want to explain why –“

Rikard held up his hand. He wasn’t interested in excuses. “Magic is not welcome in my country,” he said.

“Magic of any kind. From what I have been told, yours was completely uncontrolled. Then you were accompanied by two Mages, and more Mages followed after you.”

“I wasn’t hurting anyone.” Her voice was quiet and her gaze was downcast. She seemed truly remorseful and so Rikard fought down the anger that was threatening to come out. He knew the stories, from the days before magic had been banned in Racharan. How the magic-users had controlled those with no power. How the powerless got hurt by those who didn’t know how to use their powers, but it was all in the name of training and education, so nothing was ever done. This could have happened all over again.

“What would you have had us do?” It was Max this time, and Rikard was grateful for the chance to take his attention away from the Queen. Max’s voice was louder, angrier. “The previous King and Queen had just died, and a coup was taking place in our front yard!”

Rikard was aware of his lip curling into a sneer. He didn’t bother to correct it.

“Your country’s problems are not ours.”

Hmm. Well, there’s an interesting new character. And some interesting backstory about the country where Clara and Max spent a significant amount of time in the first book. I should look into that. Yes. *steeples fingers and ponders*

Come back over the next few days for more! 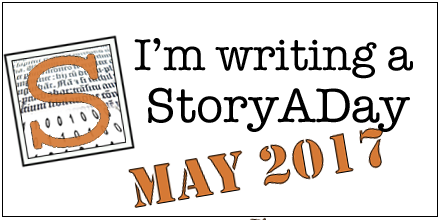 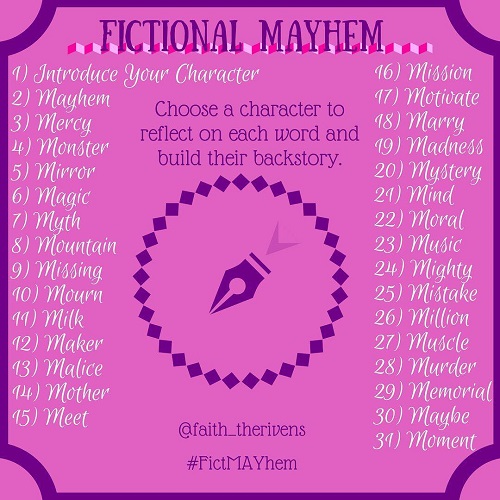 One thought on “Welcome! Also #FictMAYhem and #StoryADay – May 01”